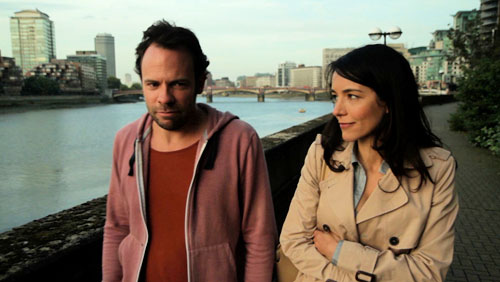 Every capital city has endless stories to tell, of love lost and found. In a city of millions, we can unexpectedly find ourselves reliving happier, more innocent times when being with someone you love seemed to be the only thing that mattered. Growing up and growing apart, striving to make ends meet, it is easy to forget the good times and that special bond that is now a distant, near forgotten memory.

Set in London, although this story could be based in any big city, Emma (Elizabeth Healey) is a career mum trying to get home early for her daughter’s birthday party and more so that there is a tube train transport strike. With the clock ticking away, she updates her protégée with what he must do in her absence. Even though a taxi has been booked for Emma, it will not turn up for another hour. Fearing that she might not get to the cake shop on time to pick up a birthday cake, Emma decides to walk it.

Ryan (Keir Charles) who is jobless spends his day using his sculpture skills in making sand sculptures on the banks of the Thames and reads comics in between his moments of artistic bursts. A chance meeting of the two occur when Emma accidentally drops her phone into Ryan’s water bucket. With this chance meeting of old lovers, Emma seems embarrassed to have bumped into scruffy Ryan. He offers to accompany Emma to the station but when they find it to be closed, Ryan offers to take her to another station. As they continue on, we learn that Ryan walked out on Emma. He apologies for not being more open about what was going through his mind at the time as he believed that he was a failure to Emma.

As they start to become more open to each other, Emma is starting to warm up to Ryan. They bring each other up to date as to where they are in their lives and who they are now with. As they continue on the way to the station, they decide to fool around with a hired bike and spend some more time with each other. What will happen once it is time to go their separate ways again?

This is a nicely scripted and acted out movie by the two protagonists, who have managed to capture those awkward glances and silences that accompany meetings of lovers past. Anyone who knows London will be keeping track of the direction the two former lovers are heading in, yes they seem to be walking around in circles at the start. Nevertheless, it is great to see London in all of its glory without terrorists, superheroes or zombies blotching the landscape. In fact London becomes the third character in this narration to help Ryan and Emma explore their futures while reliving the past that they had with each other.