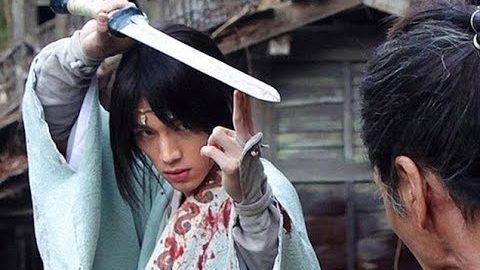 Blade Of The Immortal is a Japanese period drama fantasy film of epic proportions. It might have been a tad long at 2hr 20min but for the Manga fan it might have been deemed a little short. The big fight scene where over a hundred “baddies” attacked just two “goodies”, one of which was a defenceless little girl, seemed unrealistic but fantasy isn’t real or meant to be. Therefore the baddies stood politely poised, waiting their turn to be sliced and diced. However this is not to distract from the genre, just like WWW wrestling is not real you are still somehow drawn in by the over the top acting and real athleticism displayed in and out of the ring.

In Japanese period dramas you appreciate the fighting and action scenes for the detailed choreography, dazzling colours, cinematography and characterisations. In this film there is appreciation for all these, but I felt it was a little flat and predictable in places. However it was unpredictable and entertaining in a lot more places than not.

The story twisted and turned as you would expect of a Japanese period drama piece. The fight scenes evolved out of revenge and it was at the core of this film but driven by way of a sweet little girl called Rin (Hana Sugisaki) who had to enlist the help of a talented yet bounty hunted poor samurai called Manji played by Takuya Kimura. A witch cursed Manji with immortality and as a Samurai made him invincible, well like all good masterpieces his invincibility is challenged but no spoilers here, you’ll have to watch the film to find out how.

The pair’s journey was crossed by a variety of bandits and hoodlums which were dutifully dispatched by the Samurai. Rin went into training and I thought OK we’ll see a montage of her training and before you could say smelly samurai she would become an expert and start making the villains pay with their lives. I’m pleased that this worn clichéd path wasn’t trodden though Rin specialised in small knives between her fingers, they often ended up not where she aimed creating some comedic banter with Manji pulling one from his back.

Manji’s dull raggedy dark and light kimono contrasted with the bright and vivid coloured costumes of the female characters, which looked and fought just as hard and skilled and to be honest better than all of the male characters, and believable too. The antagonist ruthless warrior Anotsu, played by Sota Fukushi was very pristine looking in his turquoise kimono and very effeminate and not until he was betrayed by his co-baddies did his appearance gradually get blood stained and dirty.

Manji and Anotsu while carrying on their separate fight scenes help each other to fend off the hordes of baddies watched from on high by their leader eating his packed lunch as the final fight scene unfolds before his eyes till he is left alone to be slayed.

Numerous times Manji is fatally struck and the blood worms heal his wounds but it did begin for a stage turn into a slasher type movie and to laugher we see Manji’s severed hand scramble back to its arm and re-attach itself, Adam family’s hand sprung to mind.

This was an epic film and while only time will tell if it becomes a classic I certainly think that all the Manga comic bods will deem as classical and must watch viewing if you are a real fan of the author of the original manga comic that this film is based on.