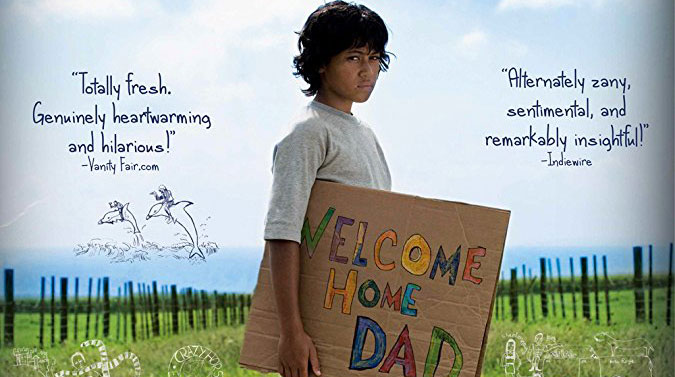 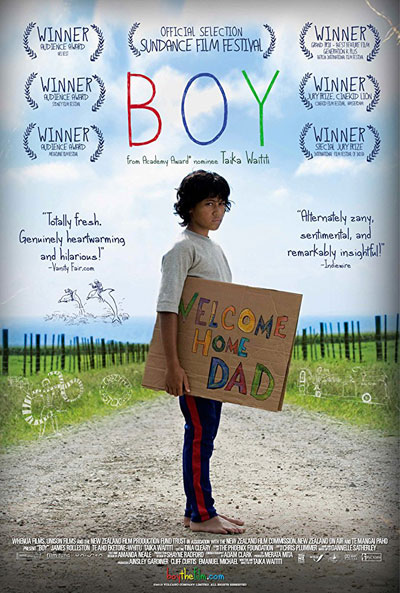 “Boy” (2010) is one of the early creations of Taika Waititi, a New Zealand director, actor and comedian, who gained a world-wide reputation with his recent films, the comical study of modern vampires in “What We Do in the Shadows” (2014) and the adventurous ‘Ricky come home’ tale “The Hunt for the Wilderpeople”(2016).

“Boy”, touching and exhilarating, coming-of-age story set in 1984 East Coast New Zealand, follows a boisterous 11-years old Michael Jackson fan, Boy (James Rolleston), and his younger brother Rocky (Te Aho Eketone-Whitu), who thinks he has magical powers. Having put his absent father, Alamein (Taika Waititi) on a pedestal, Boy must face the harsh reality, when freshly released out of prison, he and his ludicrous motorcycle-less gang of Crazy Horses, suddenly appear on his doorstep.

Alamein’s ‘big brother’ attitude towards his sons is full of ruffian immaturity. Boy, yearning for his father’s love and presence, at first dazzled, quickly realises that Alamein is not the hero he imagined him to be. Soon, the reason for his sudden return emerges, his aim to find the loot he buried in the nearby pasture and leave, that is of course, as soon as he remembers where he buried the money. Boy now faces a dilemma to either follow his father’s hoodlum ways or be the head of the family that Alamein never was and most probably never will be.

This poignant film bursting with breathtaking scenery of Bay of Plenty, magnificently but subtly presents the maturity of the children of this close-knit Maori community in a scintillating contrast with incredibly immature world of adults.

The strength of the plot is equally matched with excellent performances of the largely non-professional actors, especially the lead children, James Rolleston and Te Aho Eketone-Whitu. Their aptitude to convey the calamitous aspects of love and loneliness is extraordinarily memorable.

The only downside of the film might be the abstruse but melodious New Zealand accent, however the initial struggles to decipher it, are promptly outplaced by the sheer joy of the story.

Overall, original and moving, it is a recommended watch if you desire to lighten up your day and don’t mind to shed a tear or two in the process.

Boy is in cinemas on 13th October and for digital download on 27th October.