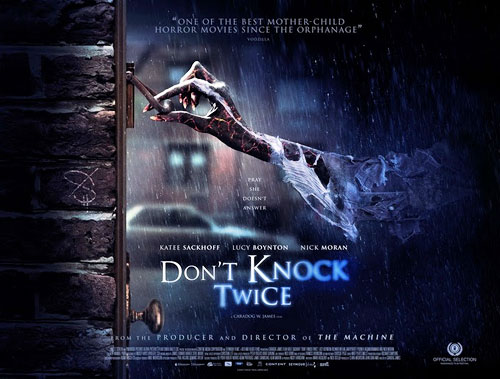 As far as it goes for modern day horror movies there is a slight shift away from the quiet, quiet, bang ones that were popular a decade ago. Recent movies such as The Babadook and Under The Shadow showing that suspense, good characterisation and originality can make horror movies a more satisfactory and enjoyable viewing experience. While horror aficionados will still enjoy the fun they will get out of Don’t Knock Twice, the least seasoned viewer will certainly jump out of their seats. Unfortunately, this is one of those movies that seems to take its nod from 1970’s British Horror movies, with mixed results.

Jess (Katie Sackhoff) is trying to reconnect with her daughter, Chloe, who she had put up for adoption nine years previous. Now a teenager, Chloe (Lucy Boynton) would prefer to stay at the children’s home than have to appease to her estranged mother’s wishes. Chloe goes out one evening with her boyfriend Danny (Jordan Bolger) who encourages her to go to this abandoned house where an old lady killed herself. So the folklore goes, if you knock once on the front door, it will summon up her spirit. If you knock twice, she will come to get you. Danny knocks on the door twice and convinces Chloe to do the same.

That night Chloe contacts Danny online and before she knows what has happened, Danny has disappeared from his laptop. Then Chloe experiences some strange occurrence that scares her so much she runs off in the middle of the night to her mother’s house. Jess and her husband Ben (Richard Mylan) take Chloe in but she says that she will only stay for a couple of nights. Chloe is not even safe there and she sees things that upset and frighten her. Unfortunately, Ben has to go away on business. Will mother and daughter feel safe in the house all by themselves?

This is a traditional creepy horror story that manages to chug along at a decent pace but it just cannot seem to elevate itself above other horror movies. To elaborate on what those failings are would be to include spoilers, which is not what I want to do here. There were a couple of scenes that evoked laughter when they were not intentionally funny. Other failings would be that the characters are a bit one dimensional and seemed to have stepped out from other horror movies. This is not the fault of the actors or the two lead actresses who make the best out of the clunky script, a script that seems to service the ending more than it should.

Don’t Knock Twice will be released in cinemas and VOD in the UK from 31 March 2017 with a DVD release on 3 April. A limited theatrical release and VOD in the USA is available from 3 February 2017.