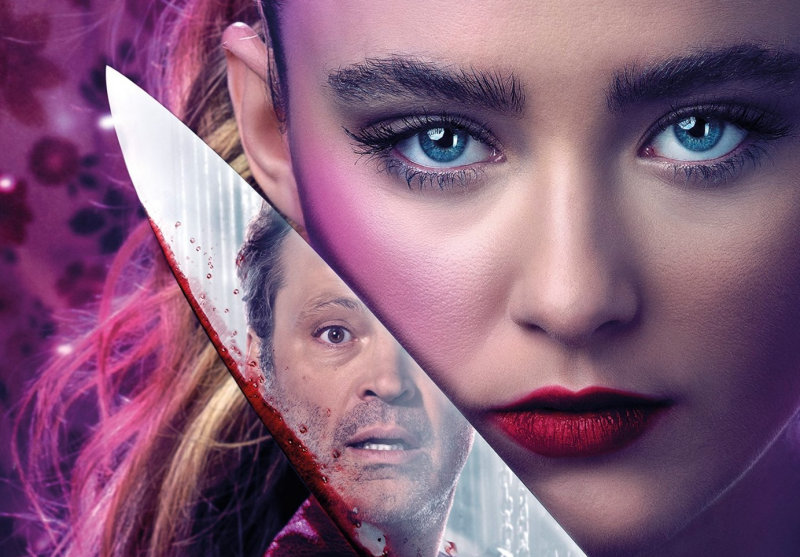 FREAKY is a fun horror movie from Blumhouse Productions starring Kathryn Newton as high school student Millie Kessler and Vince Vaughn as the Blissfield Butcher, a psycho serial killer known to everyone in the town as a local urban legend.

After an immediate killing spree at the beginning of the movie the Butcher targets Millie while she waits for a ride home after a football game at her high school.

Stabbing Millie with a magical dagger he found at the scene of his last attack the Butcher finds the same wound on himself and leaves Millie alive in the road.

Awakening the next morning both Millie and the Butcher find they have switched bodies, Freaky Friday style!

To reverse the process Millie (as Vaughn) finds she only has 24 hours to stab the Butcher (as Newton) with the mystical dagger, which is now in the hands of the police, or the change becomes permanent providing a great disguise for the Butcher to carry on killing, but not so good for Millie, now a middle aged man wanted as a psychopathic serial killer.

FREAKY is a perfect blend of the themes behind a Friday the Thirteenth slasher picture and Freaky Friday, all done in a high energy fun Blumhouse Productions style and with two great leading actors, Kathryn Newton initially meek and mild turning hot and dangerous and Vince Vaughn, scary and psychopathic turning scared, feminine and desperate.

A sequel would be nice and producer Jason Blum has reportedly expressed his hope that it will happen. Only time will tell and would definitely be welcome.