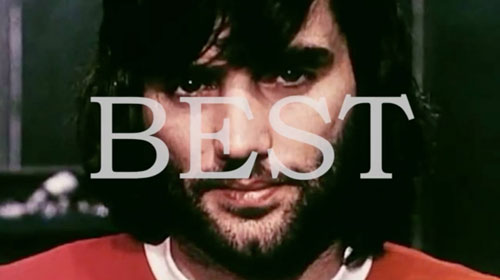 There are very few football players that deserve their own documentary and even those that do have not lead or experienced a life like the one celebrated in this documentary. George Best was the first football player who became a pop icon of sorts, endorsing products and hanging out with famous celebrities. What got him there was the skill he brought to the game, no one could turn a match around quite like George Best, running rings around the opposition and making it all look so easy.

The documentary begins with a voiceover from George’s ex-wife Angie Best, who was recounting one night when she was driving in very wet conditions, she spotted what looked like a homeless tramp walking in the middle of the road. As she got nearer, she realised it was George, drunk again. Angie drove on. With the aid of voiceovers from George and various talking heads ranging from football colleagues to friends and ex-girlfriends, we get a balanced story of who George Best was and what he meant to people.

Building a team up from the aftermath of the 1958 Munich plane crash, Manchester United were keen on trying out youngsters for the team. George Best travelled over from Belfast with a friend for an unsuccessful afternoon tryout. Returning home, his parents were not accepting this rejection and persuaded the coach to give George a second chance. He was signed up and started from the bottom up, cleaning the players boots and other chores until he was called up to play for the team. George quickly impressed Sir Matt Busby and there was a bond between them.

By the time George was 22, he had achieved everything possible in football. He viewed his football skills as something he did not have to work very hard at and looked for other things to replace the excitement he got from football. So he turned to drink and women and that is when the newspapers gained an interest in reporting George’s off pitch activities. As things started turning into a nightmare for George, Busby’s retirement, unsuccessful managers, not showing up for training and declining fitness, this began a downward spiral and no one could stop George from being his own worst enemy. For most people, this is the George Best that is remembered and this documentary reminds us why the man was such a great footballer.

There are similarities between George Best and Amy Winehouse, where both stars needed someone who could turn their lives around, if they were so willing. For both, there was a point of no return. While there are some great clips to show the calibre of skill George brought to the game, the sweetest one is when he scored a goal in the North American Soccer League. An unfit Best was incensed that an offside goal was awarded to the opposition, he proceeds to run rings around the opposition’s defence and scored. When the ball was at his feet, Best could control and anticipate the movement of the ball. When the world was at his feet, George could not cope with the unwanted media attention. This is a fascinating documentary on the first superstar of football.