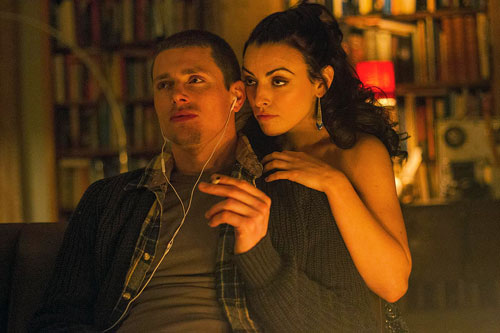 IDENTICALS is a British sci-fi thriller written and directed by Simon Pummell. It follows a young couple Slater (Lachlan Nieboer) and Nadia (Nora-Jane Noone) who arranges a special night for Slater’s birthday. In the middle of the night, Slater is woken up by someone pounding on the door. He answers the door and some people in masks with guns barge in looking for Nadia. Slater tells the intruders that he is alone, giving Nadia time to escape. As they enter the bedroom, the intruders start beating up Slater so Nadia picks up a heavy object and kills one of them, but she is then captured and taken away. Slater unmasks the dead intruder to find that the dead person is Nadia and he disappears just as the police turn up.

Now on the run from the law as a suspect in the murder of Nadia, Slater goes to Brand New U, an organisation that creates a better identical version of you. Slater decides to become an Identical, where he is to live a new life where he now has a new apartment, job and identity with no links to his past. But Slater cannot resist keeping a Polaroid picture taken on the night of his birthday, which is frowned upon when it is discovered by one of his so called new friends, who is actually keeping a watchful eye on him. When Slater seemingly finds Nadia again, he tries to reconnect with her, leading to unfortunate consequences.

There is no doubt that this is a visual treat on what is essentially a beautifully shot, low budget movie. The concept is interesting but does not seem to be fully fleshed out for the screen. There are many questions that are unanswered as the story unfolds and it then becoming a bit of a muddle for the second half of the movie. Even though Simon Pummell has commented that the story is a reflection of how we make up different personas in social media by cutting out our flaws, it is not obvious that this is what he is going for. The movie also dragged a bit and it would have benefited from tighter editing. Overall, it is an interesting, if at times, frustrating watch so let us see what Simon Pummell comes up with next.