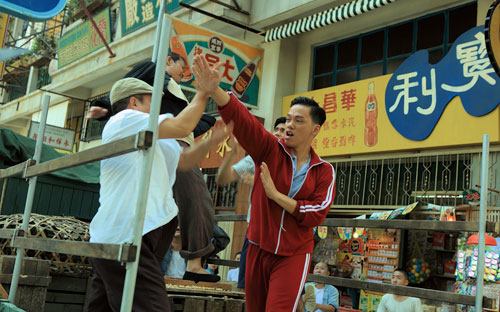 There are a number of Ip Man movies out there and not to be confused with those ones, to give this movie its full title, lp Man: The Final Fight has nothing to do with any other movies or TV shows called lp Man. Now that this is cleared up, we can settle down and watch this true story about a Grandmaster who taught his pupils martial arts in his style, furious, but with dignity and grace.

lp Man (Anthony Wong) travels to Hong Kong and starts a kung-fu school. He refuses to put a sign up as he feels it might attract the wrong people. The number of students grows and they feel obliged to look after their master any way they can. Ip Man’s wife Cheung Wing-sing (Anita Yuen) moves to Hong Kong but does not grow accustomed to life in the big city and she eventually returns to Foshan with their son. When one of the triad leaders finds out about the school, he confronts lp Man where they have a fight off that leads to a draw and respect for each other.

Amongst other incidents that are covered is when one of the students who is a police officer is offered bribes and another student who turns to the underground fighting scene to make some extra money. This is one of the main flaws with the movie, it is for the most part a series of tales where some of the stories fall to the wayside without any kind of conclusion or explanation. On the plus side, this is beautifully shot, a feast for the eyes in what seems to be a faithful reconstruction of Hong Kong in the 1950s. The action scenes are well choreographed and it is always a treat to see lp Man in action. Special mention goes to Anthony Wong who makes the role his own and it is hard not to imagine that this is what the real lp Man was like.