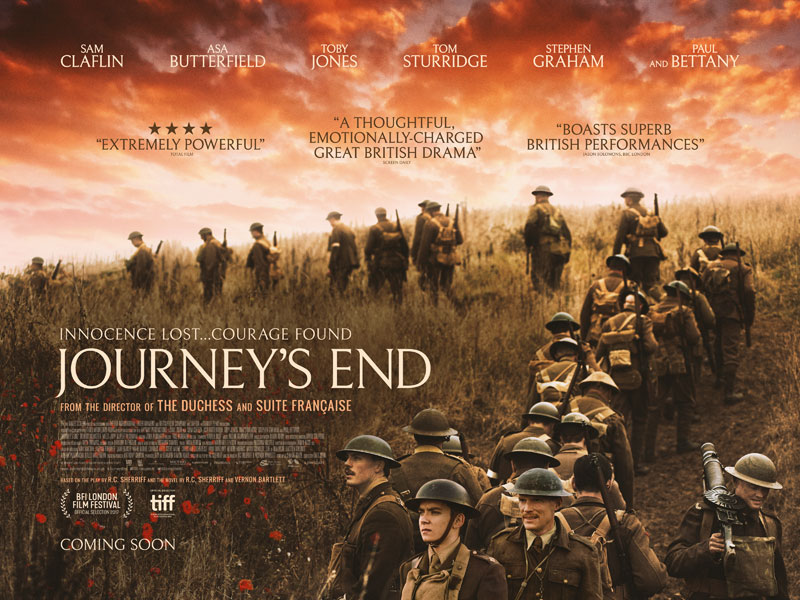 Journey’s End is a quaint film made by Saul Dibbs, that captured the essence of a bygone era when the ruling class ruled more with bravado than common sensibility. Watch this film and you get a front row seat to tales of the end to a few gallant men’s journeys, in the front line trenches of the 1914 world war.

This onion layered film about the simple act of a changeover of soldiers in the trenches shows the different emotional stages soldiers and officers go through and how they cope with its effects on themselves and each other.

From the opening close up of the intense deaden trance like eyes of a marching officer solder going past a bunch of happy go lucky muddy solders returning thankfully from the front, you were drawn into the emotional roller coaster that ran through this film.

The serious subject of war was deliciously interspersed with joviality around food and dining. Laughter bounced off the dank and drab canvas like damp walls as the human futility of war was well acted out and produced much welcomed relief throughout the film.

The film at times could be likened to an oil painted master piece with some of its scenes’ light and shadows painted by a master craftsman of exceptional talent. The lighting at times was almost perfection personified but at other times it had the feel of artificiality. Fortunately we were not subjected to this for too long as most of the film was underground creating the oppressive closed atmosphere of the ensuing death dancing in the shadows of gloom.

The closing aerial shot of the muddy squelching dull and grey devastation of the smashed body strewed trenches below was a master piece of cinematography and a contrasted view of what had played out previously in tight and dark spaces depicting the slow yet inevitable corruption of the human condition and the inner turmoil of the leading officer. It is worth the price of admission alone just to see such a moving poetic summary of the futility of war and its immediate aftermath.

The economic non expansive views of the actual bombardment was clever. We are enveloped by a great soundscape as the mortars crash amongst the trenches while we watch the jittering of timely cutting to and from various scared and pinched faces of the young boys’ grimaces as they edge closer to their end.

The film was not shot with a single view of gratuitous violence or brutality. In fact even though there is no blood or flying through the air or any hint of a severed limb in sight during the bombardment did seem a little odd. The gentleness of touch and caressing of a face in the midst of carnage and destruction does seem out of place. Indulging a talented film-maker to draw from his gentler side of the emotional palate detracts from the authenticity of the scenes and the film as a whole for me.

However one haunting image was that of a rare wide shot of the dull grey landscape of devastation with a stacked pile of unearthly white crosses to mark unidentifiable bodies, sums up the futility and waste of war in one simple yet memorable silent scene.

All in all this was a good film, about a simple war story painted lovingly with lights and dark shadows across the screen that to my mind lingered a little self-indulgently in places.