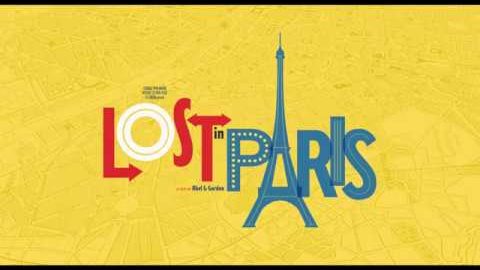 I wasn’t sure what sort of film ‘Lost in Paris’ was going to be, but worked out after a few minutes that it wasn’t a standard rom-com, a drama, or a satire, although it does have elements of all three of those genres. It has some comedy, there’s romance, a few satirical observations, and some dramatic social commentary, but it’s packaged up as a slightly quirky and artistic slapstick.

‘Lost in Paris’ is part English, part French (with subtitles) and involves three main characters. Fiona (played by Fiona Gordon) lives in a small Canadian town. Her 88-year-old Aunt Martha (Emmanuelle Riva) moved to Paris when Fiona was young and in an attempt to avoid being put into a nursing home, sends a letter asking for her niece’s help. Fiona bravely responds by getting there as quickly as she can. This is the first time Fiona has travelled and so in her enthusiastic haste to get there and because her aunt has disappeared, Fiona experiences some bad luck, a few misunderstandings and various other situations, many of which occur after crossing paths with Dom (Fiona’s real-life husband, Dominique Abel), a tramp who is both likeable and annoying. 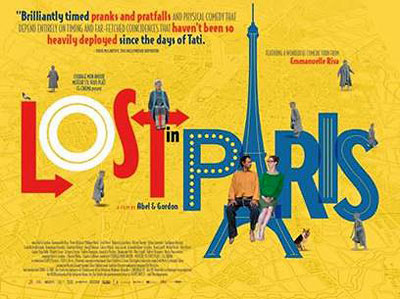 At times ‘Lost in Paris’ is a bit big for the big screen and some of the action is a little over-played and too exaggerated for the subtlety that film cameras capture. In the theatre or the circus tent it is necessary to have movements that are larger-than-life, and although this wasn’t evident in the whole of the film, much of the slapstick did sadly feel too deliberate and forced.

There were still several laugh-out-loud moments and some clever observations and strands, but there were also some curious decisions to the story and the script that I didn’t find funny at all and which, in actual fact, made me feel uncomfortable. I think these were done in the name of comedy, which I accept is quite a personal and individualistic thing… what tickles my funny bone will be different to what tickles yours (in some cases) so maybe it’s just me that didn’t see the funny side.

Abel and Gordon have the look and ability of performers half their age, along with a modern style reminiscent to that of the great master of slapstick, Charlie Chaplin. He wrote, directed and starred in many of his films too, which admirably Abel and Gordon do again here themselves.