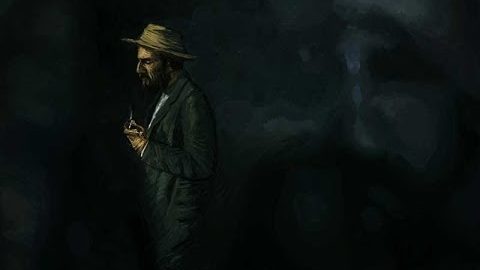 LOVING VINCENT is a journey, via characters in the paintings of Van Gogh, who travel through scenes in the artist’s works, investigating the events surrounding the painter’s death. The vehicle is Armand Roulin the son of the postmaster Joseph, who struck up a personal friendship with Van Gogh after delivering hundreds of letters from his brother Theo. Both Armand and Joseph, along with other members of the Roulin family, appear in various Van Gogh paintings so the use of these characters makes sense in the film’s storyline. 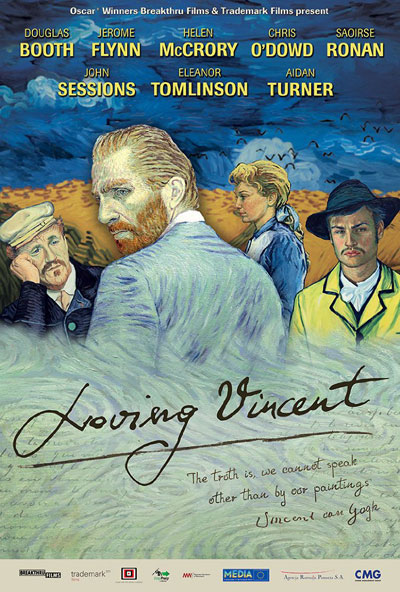 A letter needs delivering to the Van Gogh family and the only remaining member is Vincent’s sister in law. To get to her Armand needs to find Vincent’s doctor Gachet, a friend and fellow amateur artist who spent many hours painting alongside Van Gogh. It was Gachet who treated Van Gogh’s fatal gunshot wound so through him Roulin is able to unravel the painter’s final hours. As part of Roulin’s inquiries we get to hear different possibilities of the cause, motivation and manner of his death and whether it was suicide at all.

As intriguing as all this is to Van Gogh fans, what steals the show is the sheer cinema of this pioneering film, the first fully painted feature animation. The whole story is visualised through Van Gogh’s art, with each scene having been shot in locations similar to where he would have lived and worked. Afterwards the edited film was worked on by 125 oil painters from around the world who painstakingly hand painted every single one of the 65,000 frames in Van Gogh’s own style. What you’re left with is something akin to works from Van Gogh’s own canvass, an immersive view into his intense world, and probably the closest we’ll ever get to experiencing life through the artist’s own perspective.

The only slightly inauthentic aspect of this visual masterpiece was the dialogue which, ranging from his doctor to the waitress at the tavern the painter frequented, was all spoken in British accents. But for this slight flaw, anyone who knows and loves the phenomenon of Van Gogh will find LOVING VINCENT a real treat and something of a work of art in itself, whose originality alone makes it a fascinating watch.

Released on 13th October by Altitude