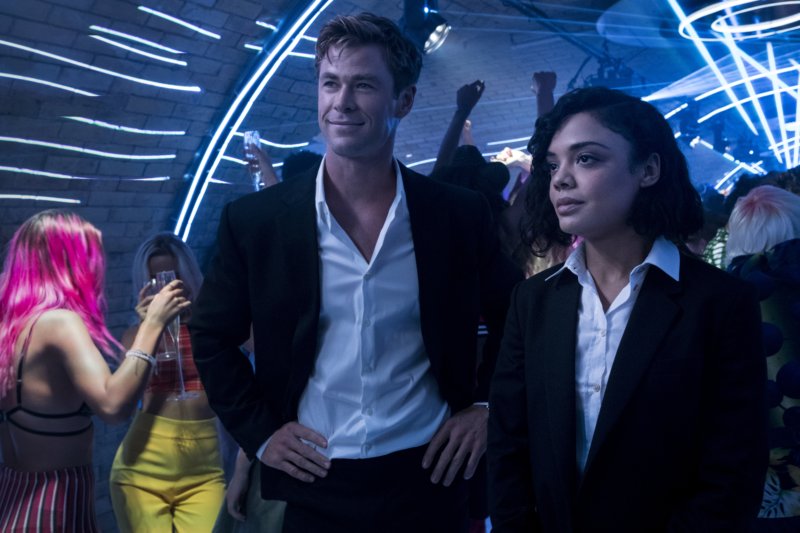 Men in Black: International is a fun and humorous movie with an enjoyable storyline, staring Chris Hemsworth as Agent H and Tessa Thompson as Agent M.

After a glimpse from the past and a short introduction to Agent M (Tessa Thompson), we are immediately thrown into the crazy universe of Men in Black. Starting with Agent M joining Agent H (Chris Hemsworth), who’s not living up to expectations, the duo find themselves caught in the middle of an unexpected alien assassination. After narrowly surviving the encounter, and being chastised by their peers, the two find themselves in possession of a planet destroying weapon, and are faced with the return of a world ending threat they thought to be gone. Now on the run, with a mole in the MIB, the two agents must work together to find the mole and save the world, whilst stopping the alien super weapon from falling into the wrong hands, with nothing but their wits and technology that’s out of this world.

This new addition to the Men in Black franchise, is a good expansion to the MIB universe. The movie shows us just how large the MIB operations are, hence the word “International” being in the title. Although this movie has been looked at by some as a “reboot”, with a new cast and a different spin, it has definitely not dumped the original storyline. At the beginning, they tie the two storylines together with the use of references. This includes the New York MIB base of operations and a couple of the original characters. If they do decide to do more with the MIB universe, then apart from creating a new extension with MIB International, they have certainly left it open with the original still in existence.

Chris Hemsworth and Tessa Thompson acted very well as co-leads. This of course is not the first time they have starred in a movie together, as we first watched the two act in the Avengers franchise. The two characters they played have good chemistry, as they are clearly meant to think alike. There is also quite a bit humor between the two, as well as other characters which makes the movie more enjoyable. However it did feel like they could have gotten more out of Chris Hemsworth’s character than they did. It was clear however that they were trying to create some sort of an equal balance between the two.

The story is basically only focused on Agent M and H. Although there are other actors who did a good performance for their bits, the story is about these two. Liam Neeson who plays Agent High T, although he is in the movie, he has a much smaller amount of screen time compared to the two stars. However he is a reasonably crucial part of the story in the end.

Regarding the story, it was nothing new. The plot was basic, and I do feel I’ve seen other iterations of it many times before. The unique parts of this movie was more the creative thinking, and the actors themselves. The story also incorporated a simple plot twist. It was not poorly executed, but there was one small but obvious giveaway, before they gave it away at the end. The movie had some very entertaining fast paced action scenes, which caught my attention. Although you knew the main characters weren’t going to get killed, they were fun to watch, and really added to the adventure. On another note, I don’t usually criticise a movie for being too fast, as I generally like faster paced scenes, but there were a few points in the movie where I felt it was a bit rushed. It’s difficult to say where, but it was just something that came across while watching.

The Men in Black films have always been heavy with VFX (Visual Effects). The very nature of these movies has always demanded this. With this latest installment, they have definitely not held back the CGI. Whether it be the aliens or the tech, they put the effort in.

Speaking of aliens, you will experience a vast range of alien species of all types, shown in a very normal and everyday life manner. Although that sounds great, it got a bit much with the whole cute little alien thing in general. The biggest case of this was when they introduced Pawny (voiced by Kumail Nanjiani) who is a miniature alien reflecting a chess piece. He became a semi-main character, and although his integration was done well, it got irritating very fast.

The technology ideas and CGI on the other hand were primarily my favourite parts. They had some very good ideas and implementation. This includes Agent H’s car with its hidden weapons, the hover bike, the transforming intercontinental train and the Lexus QZ 618 Galactic Enforcer jet. My favourite of these was Agent H’s car, it really caught my attention when they were pulling weapons out of it left, right and center. Although I like Agent H’s classic car and the hover bike, I almost feel like we didn’t see enough of the “2020 Lexus RC F sport coupe” which transforms into the flying car (Galactic Enforcer) at the end.

As this is a CGI heavy movie with creatures not of this Earth, one easy guess might be to expect one or more massive monster battle scenes. However, if you are someone who is not really into that kind of thing, then you can rest assured, as they didn’t do any of that. The one scene where this would have happened was so fast that it didn’t detract from the story.

Of all the alien species the most interesting were the main villains, the twin alien assassins, played by Laurent Bourgeois and Larry Bourgeois. The two appeared to be some sort of energy beings and were able to morph matter around them. This of course allowed for some very good CGI and was an interesting concept. In the movie there were many direct references to the fact that the two actors are professional dancers.

I really enjoyed The Men in Black theme tune, as usual it was a good listen. They frequently used iterations of it throughout the movie. It had been edited together with its various scenes very well, and added to the entertainment. Regarding the movies sound effects, this had mostly been done very well, and really added to the immersion. I was very impressed with the sounds used during a lot of the advanced technology scenes. In particular the intercontinental train sounds, and the energy weapons fire really caught my attention. The sounds were perfect for what they reflected. However, I think the sound effects used during the hover bike scene could have been mixed in a bit differently. The sounds felt a little out of place at first, and when the bike skidded into a wall, I almost didn’t hear it, which was odd. But after that, it seemed to be OK.

They have left the movie very open for a sequel. Whether this will follow Chris Hemsworth, Tessa Thomson, both, or neither one. We will have to see if the franchise gets another movie or not. The movie is estimated to have cost $110,000,000. Unfortunately though, it only made $30,035,838 on opening weekend in the USA (16 June 2019), which is not great when compared to how much it cost. However the worldwide gross was $253,264,440 so it has made its money back, and a profit.

Men in Black: International will certainly indulge the imagination with its creative ideas and CGI. If you are expecting a brand new unique story then don’t, as it is a basic plot which I feel I have seen before in other iterations.

For me the CGI was the big thing. Even though the story was present and entertaining, the visual effects pulled ahead. There was clearly a lot of creative thinking behind it which I was very impressed by.

They also thought of a wide variety of different wild alien species ideas, which was a nice touch, accept for when it got very irritating with the tiny cute alien stuff. But regardless of my thoughts on this, they applied the CGI very well. They didn’t do any massive monster battle scenes, which personally I was pleased to see. Generally they were more focused on the characters acting and showing the story, which made it more enjoyable.

Overall this was a fun and humorous movie, with some good action scenes, a wild imagination and a good theme tune. It is definitely worth watching, especially if you’re a Sci-Fi fan.