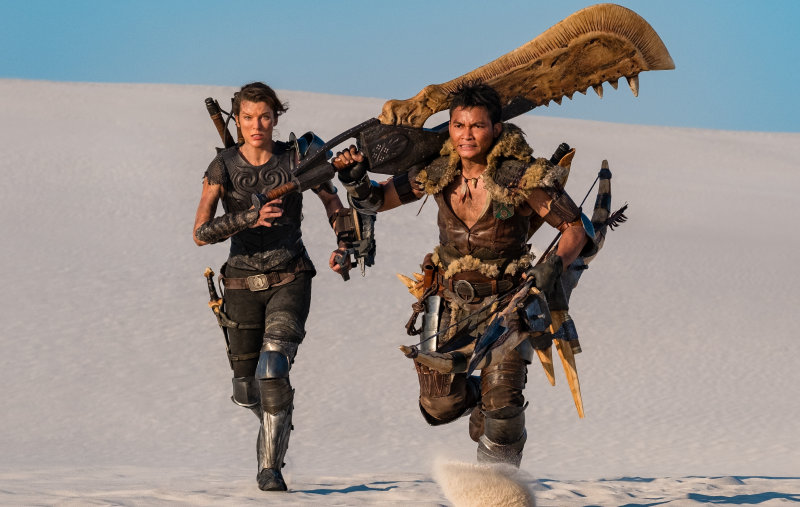 Monster Hunter is a film adaptation of the long-running Capcom video game franchise. Directed and co-written by Paul W S Anderson and starring his real-life wife Milla Jovovich, the first thing that comes to mind of course is the very successful Resident Evil franchise. If you enjoyed those movies, which I did, you’re probably like this one too.

Artemis (Milla Jovovich) heads an army unit on patrol in the desert searching for a team of missing soldiers. A massive storm, a runway of alien-like structures, a huge dinosaur-like skeleton and a portal that transports them to the New World. Still a desert but this one is inhabited by an enormous monster which travels under the sand.

Artemis ends up being the only one to survive and she encounters Hunter (Tony Jaa), an inhabitant of the New World. That meeting turns into a prolonged battle between the two until they realise they are not enemies and become allies to battle the sand monster known as Diablos.

Later in the movie they join up with Hunters team which is headed up by The Admiral (Ron Perlman) who he had been separated from.

Together they must travel to the Sky Tower, built by an ancient civilization, which is the source of the portal linking their two worlds. Once there they have to fight the Rathalos, a fire breathing dragon.

Throughout the whole movie there are lots of opportunities for some epic battles and general all round action with some very nice special effects that don’t get in the way of the actors performances. The sci-fi side never gets technical but provides an easy to follow adventure.

Whilst there is an endpoint to the film the story doesn’t get closed off, it’s more like the end of a game level, ready to level-up, leaving Monster Hunter open to a natural sequel or indeed a fully-fledged movie franchise.