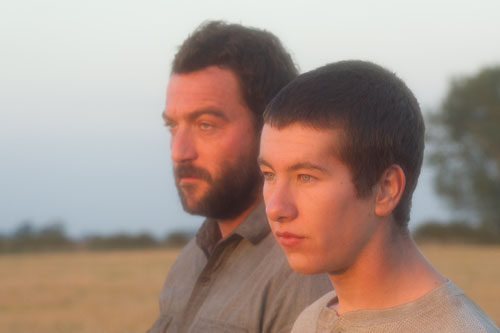 The second movie this year to be named after a city or region in England, NORFOLK is the polar opposite of GRIMSBY.

The story follows an unnamed man (Denis Ménochet) and his boy (Barry Keoghan) who seem to lead an idyllic, if somewhat simple life. They hunt and live off the land. When the man notices that the boy has an eye on a girl (Goda Letkauskaite), the man tells the boy to forget her, she will only be trouble.

One day, the man’s five television sets that he has set on different channels goes on the blink, except for one, where a strange man (Trevor Fox) appears and orders the man to kill everyone in a nearby compound, without any mercy. What follows is a ritual dance of sorts, reminiscent of the scene at the start of Apocalypse Now with Charlie Sheen in the hotel room, but this time as if it was directed by David Lynch.

In the meantime, the boy spots an old couple (Sean Buckley and Eileen Davis) passing by on a water barge, staring at him. They plan to take the boy away from the man. One night, the boy is drawn to explosions coming from the nearby complex. The boy is upset with what his father had done because living in the complex was the girl, which the boy believes to have perished. The boy packs his bags and leaves. Unknown to the boy, the old man has a rifle pointed at him from up in the hills.

This is a slow, brooding movie that fails to engage during its 90 minute running time. Scenes where happy gospel music is being played on a radio feel out of place. There is not much dialogue and what dialogue there is, for the most part is uninteresting and meandering. Characters go through their daily lives either emotionless or cursing. There is scarcely any plot to speak of and not much else going on to draw you into the movie.