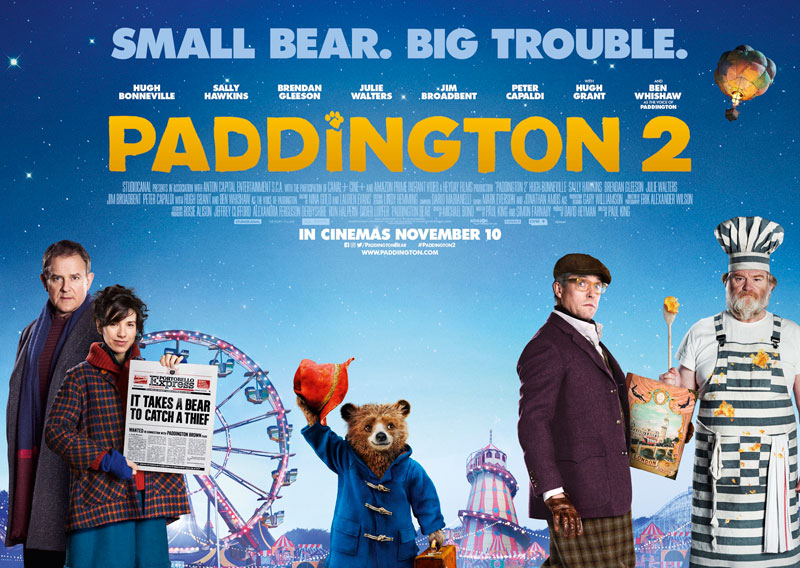 When the first Paddington movie came out, it took audiences by surprise. Positive reviews and word of mouth made it a smash hit. The one comment that was repeated by those that saw the movie, declared that they were charmed by it. Even this reviewer had resisted seeing it for a while and after a few weeks I viewed it and was also charmed by it. So the question is does the sequel live up to what made the first movie a success with both adults and children?

The movie begins with Paddington, again voiced by Ben Whishaw, settling down with his new family, the Browns and contributing to life in the new neighbourhood. Paddington is there to remind a neighbour that he has left his keys in the house before the front door shuts behind him. He helps one of the refuse collectors to familiarise the A to Z of London for a test. As it is coming up to Aunt Lucy’s 100 year birthday, Paddington wants to buy her a special gift. At Mr. Gruber’s antique shop, Paddington comes across a pop-up book of London but is told that the book is very expensive. Paddington decides that the only way to buy the book is to earn some money by doing odd jobs such as cleaning the windows.

One evening, while out with the Browns at the opening night of a new fun fair, Paddington reveals to the once great actor Phoenix Buchanan (Hugh Grant) that there is a pop-up of London that he is saving up to buy. Buchanan realises that the book is more valuable to him than the asking price and proceeds to steal it. Paddington is accused of the robbery and is sent to jail for ten years. Will Paddington be able to find the good in people in a prison filled with not very nice and scary prisoners? How will the Browns’ clear Paddington’s name and get him released from jail in time to send Aunt Lucy that special birthday present?

I will not keep anyone in suspense, as much as you enjoyed the first movie, you will enjoy this sequel just as much and possibly more. Director Paul King has managed to sprinkle the same magic dust he used for the first movie, making this sequel an absolute treat. The new characters are interesting, some have their own quirks making them memorable and Paul King keeps the story moving at a steady pace that will hold the attention span of both children and adults. Just when you think the movie is over, there is an unexpected extra scene halfway through the end credits that is a must watch. All the actors are on top form especially the great and reliable Brendan Gleeson as Knuckles McGinty, the prison cook and Hugh Grant, who delivers one of his best performances. The comedy throughout the movie is for all ages and there is even a visual homage to Charlie Chaplin. Seeing the clever use of that visual gag, I was charmed for a second time and then some.