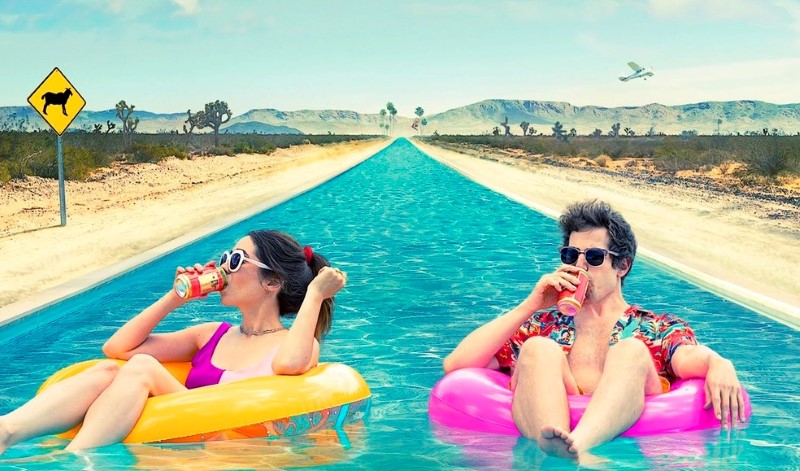 So it’s a time-loop movie, this time set on the day of a wedding taking place in a hotel in… you’ve guessed it, Palm Springs.

Nyles (Andy Samberg) has been repeating the day for so long that he has actually forgotten what his job was in the normal world. He has perfected his routine and tried every variation of every day. He has accepted his reality and sees nor aspires to any end to his existence.

On his latest day he hooks up with Sarah (Cristin Milioti) and they go out into the desert to get away from the events of the wedding. Then out of nowhere Niles is shot with multiple arrows as he is hunted by Roy (J K Simmons). Nyles drags himself into a cave, Sarah follows out of concern, and despite Nyles warnings, enters the cave. They are both sucked into a strange glowing light. The day resets but now Sarah as well as Nyles and as it turns out Roy, are all destined to repeat the same day seemingly forever.

Comedy ensues and quite a lot of talking, and a love story, as that’s what this film is really about. It’s a love story with comedy set on a Groundhog Day sci-fi background.

Andy Samberg delivers his usual likable style of comedy that anyone who has ever enjoyed Brooklyn Nine-Nine will be comfortable with, Cristin Milioti is funny and interestingly troubled, J K Simmons seems to fit into any role you can think of and it was good to see Meredith Hagner from Search Party being as random as ever. There’s lots of other recognizable cast in this picture too, all of whom deserve a mention but due to time constraints I don’t have a repeating day.

It has to be said however that while this is definitely an enjoyable film, another recent release The Map Of Tiny Perfect Things, also a time-loop love story with a younger far less established cast, manages to deliver a superior experience. It’s true that Palm Springs is more comedy but the Kathryn Newton led The Map Of Tiny Perfect Things evokes more feeling and overall I would pick that film out of the two.

On a final note I would like to point out that there is an end scene mid-credits which gives J K Simmons character Roy some closure.