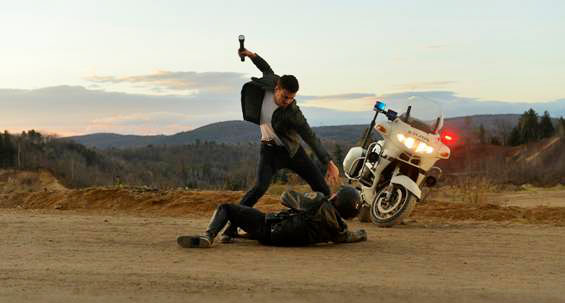 Rabid Dogs (aka Enragés) is a French remake of a 1974 Mario Bava thriller, of which the original was not released for over twenty years due to some legal wrangle. This new version from first time director Eric Hannezo shows some promise.

We follow Sabri (Guillaume Gouix) who parks his car out on a busy street, where blue smoke and gunfire fills up the street. Sabri is waiting for his three accomplices who have just robbed a bank, leaving a trail of dead bodies from the bank to the waiting getaway car. What follows is a mad dash to escape the police, as most of the action is displayed from within the getaway car where windows smash from oncoming bullets and smoke bombs are thrown into unmarked police cars. When the robbers escape into a shopping mall, they find themselves cornered by the authorities, where they take a woman (Virginie Ledoyen) on her honeymoon hostage. As they need a new getaway car, they take another hostage, a father (Lambert Wilson) who is driving his four year old daughter to the hospital for a much needed kidney transplant. Will the robbers get to the border before the police catch them? What will the father do as he has precious little time to get his daughter to the hospital?

The first ten minutes of this is very well shot with great framing, as a lot of the action is shot from within the car. Once the excitement dies down and we settle down with the characters for the rest of the movie, it turns into a bit of a road movie. There is a petrol station scene, will the hostages attempt to escape their captors, a tailback due to a road accident, will the hostages attempt an escape, I think you get the general idea. A lot more care should have been put into the script to develop these characters better than what the actors had to play with. So we get the moody, angry bad guy, the psychotic bad guy, the near timid bad guy, which is nearly a contradiction in itself. Basically, characters that are not memorable except for Lambert Wilson’s performance, who underplays his role when he can. This is not a bad movie, it is just that it feels a bit disjointed at times with a lack of tension. If there is nothing else on, it is worth a view to pass the time.