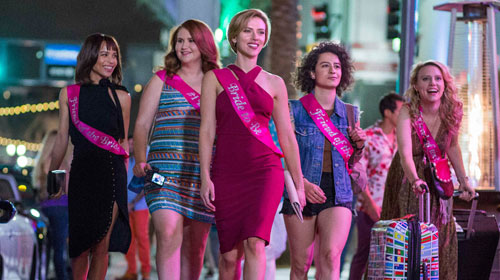 “Rough Night” that’s exactly what you’re going to have if you spend the evening watching this crappy movie.

Scarlett Johansson leads the cast of otherwise decent actresses, in this really bad rip off of Weekend at Bernie’s.

Johansson’s character Jess is about to get married and spends the weekend away in Miami with a group of BFFs. They get drunk, take drugs, then hire a male stripper for the bachelorette party. Of course the stripper gets accidentally killed and for various reasons they try to cover it up. Slapstick comedy ensues but will everything be alright in the end. Well what do you think?

I’m sure the filmmakers thought they had a brilliant idea for a movie by taking ideas that have already been made in some really classic comedies and switching the gender of the main characters. Because that’s all they’ve really done in this pointless effort of a movie, that’s desperately trying to be funny but the harder it tries the worse it gets.

When will people learn that you can’t be creative and original just by switching the gender of characters in pre-existing material. Sometimes things work because of stereotypes so change the male to a female character and the stereotype changes so losing the reason for the comedy.

“Rough Night” has a high production quality and a good cast but it’s a comedy that’s just not at all funny in any way.