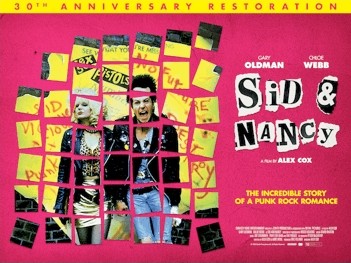 In my eagerness, to watch Sid & Nancy I inadvertently drew blood from my finger as I ripped open the padded DVD envelope and couldn’t help thinking this is very punk of me. I continued in this new found punk vein and slung the bloody shredded envelope in the general direction of the bin, but to my annoyance it perfectly disappeared neatly into it. If I tried and I regularly do try to throw my scrunched up envelopes into the bin, nine times out of 10 I miss. The point being when you don’t try hard it just works.

Unfortunately to my mind Alex Cox the director tried too hard and missed the mark of a genuine classic. Don’t get me wrong it was pleasant enough but a film about punk rock shouldn’t be pleasant!  It should be uncomfortable to watch, have a distinct edginess about it and quite frankly make you glad you didn’t have to live through it for real.

Now if Alex’s intention was to portray the utter moronically stupidity of hard drug heroin users then it did this with unparalleled distinction and success. But no, this was a love story set against a punk backdrop of sex, drugs, bad perms, jarring noise on a flea ridden filthy set of the underbelly of London heroin life.
The music was quite ok. The sex pistols music in the film seemed to my untrained ear in tune and surprisingly quite likeable. Though wasn’t the whole point of the punk band sex pistols, to make bad music and not distract from the great lyrical political statements? Be unconventional, I mean to Sid and Johnny “Sex is boring, ugly and messy” (I think I added the messy bit.)

Sid and Nancy did not wow me nor keep me glued to the screen by its creative content or story’s narrative. There were some wow factors, ok there were a few, alright then there was one but I’ll come to that later.

Gary Oldman as Sid put in a good performance but I’m sure he will not be counting it as one of his better ones. “It’s the material man”. Nancy irritated the ….. out of me, with that high pitched whining American drawl but in the end I think I was beaten into submission and have to take my hat off to Chloe Webb for her performance, as I did care about her as she devoted her life to looking after Sid.

Got to say David Hayman as Malcolm stole the few scenes he was in with his erudite utterances about the music industry and the sex pistols and Sid’s place in it. He was in an acting class of one. I hope the others took notes.

I think the Love story could have been stronger but in short a punk groupie addict of a girl with a toe fetish met Sid in a moment of sobriety. She went on a mission to secure some drugs for him. Disappeared then eventually reappeared and never left his side again, they moved to America, travelled to Paris. They made a pact to leave the world together; As they both spiralled further and further down the toilet of life, Sid reneged and wanted to return to England. In a tragic drug fuelled fight stabs Nancy. In amongst all this Sid with razor blades carved Nancy’s name across his chest, unfortunately no visible scarring was subsequently seen no matter how many times we saw Sid shirtless. Fire the continuity bod!

There was one short yet visually nourishing scene set in the café and the window looked like a painting but was a window out of which we see Sid going wild with the phone. Well done cinematographer Roger Deakins for giving me a wow moment, of colour, scene lighting and background action all rolled into one.