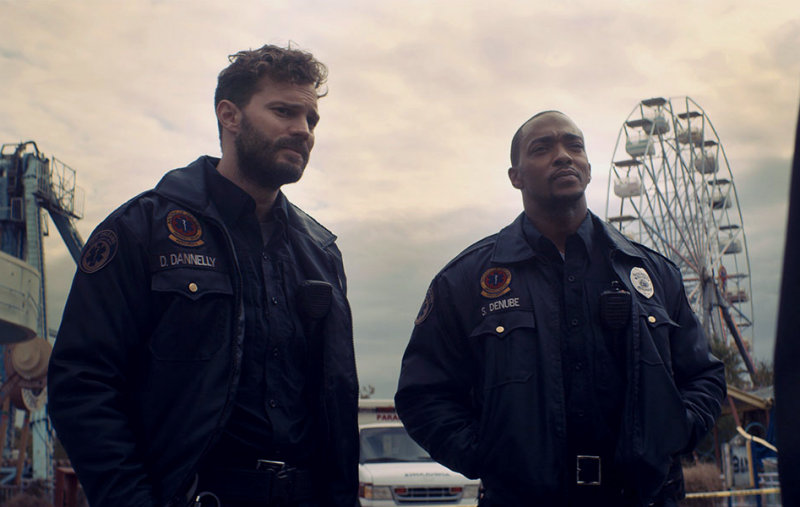 Synchronic stars Anthony Mackie as Steve a paramedic who with his partner Dennis (Jamie Dornan) work the late shift in what seems a depressing existence in a modern day city. Steve finds he has a tumour growing in his brain and Dennis has family problems he needs to deal with.

However they find themselves attending a series of calls involving people with unexplained injuries either dead or completely confused. A new designer drug is involved and after some investigation by Steve due to Dennis’s daughter Brianna (Ally Ioannides) unexpectedly going missing, it seems as a drug can cause people to briefly travel in time. Whilst older people seem to travel only with their minds younger people in their teens and twenties physically travel to another time period and Steve suspects that is just what happened to Dennis’s daughter.

Steve finds that due to his brain tumor he is also able to travel physically in time when taking the drug. He experiments with how this form of time travel works and eventually locates Brianna but with only one dose of the drug left how will they both get back to the present.

I suppose Synchronic is a time travel movie but it doesn’t really feel like one. Anthony Mackie’s character Steve has brief encounters with various people in the past all in negative ways except for one when he travels back to the ice age and encounters a human just trying to survive. All his other encounters are bad ones mostly involving racial bias and violence.

In one scene towards the end of the movie Steve remarks to Dennis that living in this modern era is the best time to exist ever as modern day problems pale in comparison to those of the past.

Whilst I feel that Synchronic has lofty aspirations it’s extremely slow and paced delivery together with it’s dark depressing feel just don’t make the movie worth the watch. There’s no doubt that Anthony Mackie delivers another solid performance as do Jamie Dornan and Ally Ioannides, but the movie just feels boring even if you generally like sci-fi as I do it’s just drawn out with a half decent basic idea and a message that today is a better time to exist than the past.