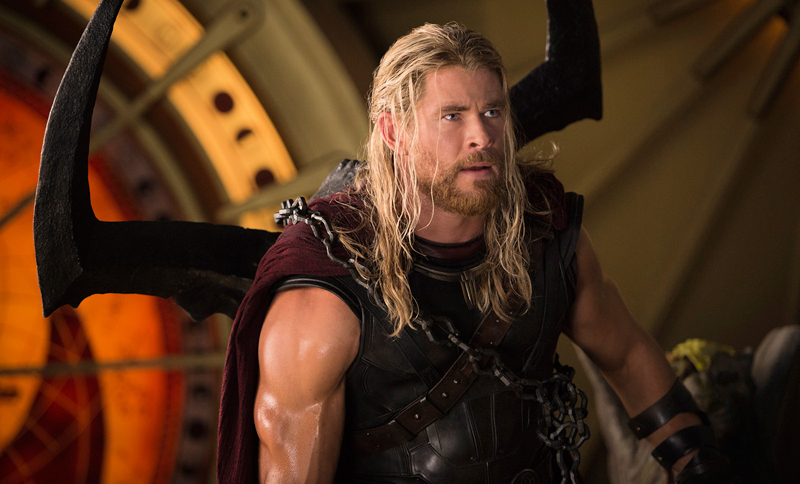 Movie Review by EDF with contribution from Neal Zetter

After the success of this year’s Guardians sequel and the re-launch of Spiderman, comes another big Marvel character, Thor, the third outing for the superhero who knows how to swing a mean hammer. The first Thor movie successfully introduced him to movie audiences that were not familiar with the character. The second movie was a slight dip in quality but nevertheless still enjoyable. So then, you might ask, what is a Ragnarok? The main idea of Ragnarok is that it is the prophesized threat to the gods of Asgard. It has consistently appeared in many Thor story arcs throughout the character’s life. With that and other elements taken from the various comics, where does the third movie come in on the quality scale? Is it more like the first movie or the second movie or is it a hammer that just ends up swinging out of control? 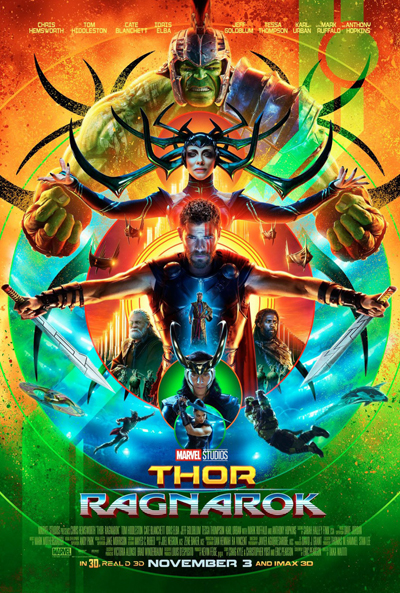 When we were last on Asgard, Loki (Tom Hiddleston) had taken on the guise of his father, King Odin (Anthony Hopkins) and Thor (Chris Hemsworth) was off doing Avengers duties. The movie begins with Thor in a precarious position, captured and bound in chains by the fire demon Surtur, voiced by Clancy Brown. This apparently is a rouse as Thor has figured how to defeat Surtur. What should have then been a straight forward escape plan is hindered by the incompetence of Skurge (Karl Urban), the new gatekeeper of the Bifröst Bridge, who has taken over from Heimdall (Idris Elba) who has gone rogue. Thor escapes with the prize, Skurge’s headgear, which on his return to Asgard, will be put into safe storage in the hope that Ragnarok is avoided.

On his return to Asgard, Thor has noticed some changes, the most glaring one is a massive statue of his “deceased” brother Loki and a play is being performed about his death. Thor questions “Odin” about what has been going on since he was last in Asgard but Thor then becomes suspicious and tricks Loki to reveal himself. Thor demands Loki take him to where he left Odin and they both travel to Earth. Odin reveals that neither son have a right to the throne when he has passed away as, unbeknownst to the two sons, they have an older sister Hela (Cate Blanchett), who will be released from her inter-dimensional prison when Odin dies. With that, Odin is gone and Hela is finally free from her prison. You will quickly find out why Hela is called the Goddess of Death and she is far from happy being imprisoned for such a very long time and seeks her revenge. Thor and Loki team up to fight their sister but find that she is more powerful than anyone either of them have ever faced. Loki calls for a retreat and summons the Bifröst Bridge back to Asgard to be opened, in spite of Thor’s objection. On the way, they both realise that Hela has joined them and she dispatches both of them off the bridge to who knows where. With no one to stop her, Hela can now rule Asgard with the help of her reanimated army. So what of Thor and Loki? What has befallen them and will they come across someone big and green to help them get their revenge?

This third movie is without doubt the best of the three Thor movies. As good as Hemsworth has been so far, here his approach is looser, confident and a lot funnier than his previous portrayal as Thor. There is a lot more character building, especially for Thor and it helps when you have a great supporting cast such as Loki, as the two brothers continue their on-off feud and love- hate relationship with each other. The opening scene in Surtur’s lair, a character that first appeared in Journey into Mystery issue 97, is hilarious and sets the comedic tone for the rest of the movie. Whether it is verbal or visual gags, they all hit the spot. If you have seen the trailer, another Avenger turns up but the one person that steals the show is Jeff Goldblum’s The Grandmaster, a character who first appeared in Avengers issues 69-71. Cate Blanchett as Hela plays the avenging sister with a coldness that is required, otherwise she would have come across as hammy and unbelievable. Hela first appeared in Journey into Mystery issue 102 and was consistently Thor’s regular arch nemesis in the comics. There is a lot more that happens in the movie that I have not revealed and I do not want to spoil it for you with this review. The best advice is to go and enjoy this eagerly awaited movie because you will not be disappointed.