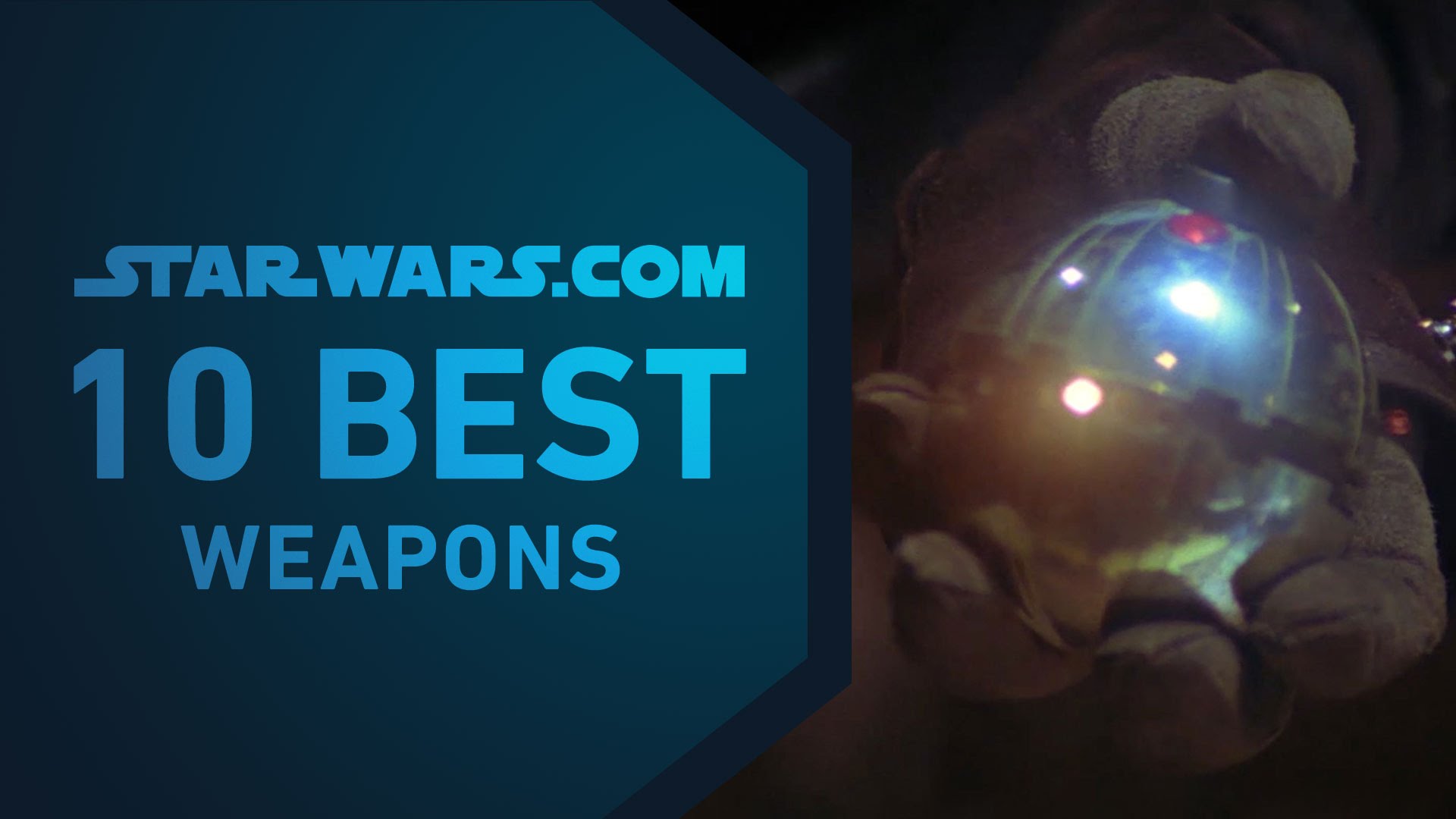 Sure, Star Wars has great drama about family, friendship, and good versus evil. But sometimes you just want to see laser swords and things that go boom. With that in mind, we’re picking the best weapons from the Star Wars films, Star Wars: The Clone Wars, and Star Wars Rebels, ranking them on originality, impact, and cool factor. Sorry, logs. You didn’t make the list this time around.

10. Wrist Rocket
For some weapons, it’s all in the wrist. That’s why this small but powerful rocket kicks off our list with a bang. Put to good use by Death Watch, it’s perfect for getting rid of those pesky Jedi in two easy steps: aim and fire.

9. Booma
Available in small and jumbo sizes, the booma is essential for battle droid demolition. The projectile of choice for the Gungan Grand Army, these balls of electrified plasma pack a punch. .

8. Flamethrower
Tired of the same old blasters and rockets routine? Then you should try a flamethrower. Often wrist-mounted, it’s a quality alternative for Mandalorians, bounty hunters, and droids alike. But the real proof of its coolness? One word: flametroopers.

7. Thermal Detonator
Ah, the key to a Hutt’s heart. The thermal detonator is one of the galaxy’s most powerful explosives, useful in negotiations and an integral part of any bounty hunter’s arsenal. Just activate, toss like so, and voila.

6. AB-75 Bo-Rifle
For those who want their weapon to do a little bit of everything, nothing beats an AB-75 bo-rifle. It shoots, it slashes, and it shocks. Our favorite Lasat loves it, and we can see why.

5. Bowcaster
Introducing the finest in Wookiee craftsmanship. More powerful and accurate than standard blasters, the bowcaster fires a metal quarrel encased in plasma energy — and it also looks awesome. Whether your job is bounty hunter, or Rebel hero / mynock exterminoator, a bowcaster is second to none.

4. Electrostaff
Need to fight a Jedi but don’t have a lightsaber? Not a problem. Take a long pole, add some electricity on both ends, and you have all you need. But wait, there’s more – the electrostaff has a handy alternate function.

3. Blaster
From cantina clashes to stormtrooper standoffs, the blaster is fit for any occasion. Fun design variations make each unique, and different features make them versatile. Uncivilized? We beg to differ.

2. Lightsaber
A handome hilt. A powerful ignition. A stunning blade and beautiful hum. The lightsaber is the galaxy’s most original weapon, from concept to looks, and no two are the same. Whether used defensively or in a high stakes duel, nothing matches the majesty or awesomeness of a lightsaber.

1. Death Star
The Death Star: an all-in-one tool of destruction and fear. The size of a moon with unequaled firepower, it remains the ultimate symbol of Imperial might. Granted, you can’t hide the Death Star in an astromech or use it to shoot first in a cantina, but when a weapon can destroy a planet, it’s #1. Technological terror, indeed.

So what do you think? Did we overlook something? Did we nail it? Are we out of our minds? Comment and let us know.