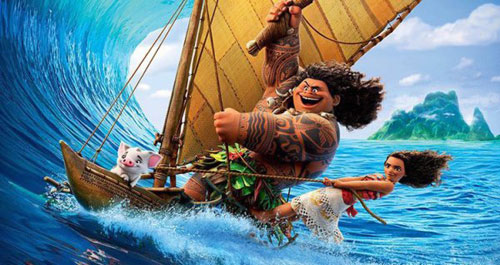 Disney’s latest film Moana features Polynesian folk hero, Maui, but the locals aren’t happy about it. The upcoming animated film apparently depicts Maui as an obese demigod, which is not how the old tales of Polynesia portray their revered icon.

Disney, being a family-oriented company, has always heavily edited their animated movies inspired by classic novels. Disney’s Little Mermaid, for one, had a happy ending contrary to what was originally written in Hans Christian Andersen’s book. Maui’s folklore, in its original form, wouldn’t get past Disney’s family-friendly standards, which is why the company has extensively edited the tale for mass consumption. While it is an understandable move, Polynesians don’t understand why the company had to turn the well-built demigod into a rather portly looking animation.

About three months ago, an article by The Guardian suggested that prominent figures of Polynesian background were unimpressed with the portrayal of Maui. New Zealand Member of Parliament Jenny Salesa, whose roots can be traced back to Tongan Heritage, described Disney’s Maui as “Half pig, half hippo.”

Disney, however, defended their motion by saying that their team did careful research before making the film. Moana’s directors John Musker and Ron Clements — who drew the characters in Disney classics including Aladdin and The Little Mermaid — visited Tahiti, Samoa, and Fiji in 2012 so that he could immerse himself in Polynesian culture, religion, and history.

This isn’t the first time that Disney has been caught in controversy due certain business decisions. Aside from Moana, Disney also made a controversial move when it removed adult-targeted Marvel products from some of the world’s leading gaming hubs. Before Disney acquired the rights to Marvel, the comic book behemoth had a slew of successful games that were performing exceedingly well in online casinos. However, in order to adhere to its family-friendly policy, Disney pulled all Marvel casino-related products from the market. Gaming hubs such as the uber popular Betfair Casino still carry Marvel-themed games such as The Avengers but they will be removed as soon as their contract expires to the dismay of Marvel fans across the world. This goes to prove that Disney certainly isn’t afraid of making bold decisions, and some will feel with Moana that any publicity is good publicity.

Moana is the story of an adventurous teenager who is a born navigator. She sets sail in search of a mystical island where strange secrets sleep. On her journey, she teams up with legendary shape-shifting demigod Maui who is full of trickery and surprises.

Check out Moana’s trailer below.