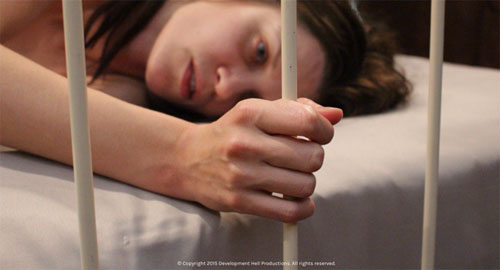 Selling Isobel is a story based on true events about a woman who gets kidnapped and trapped for 3 days in an apartment in London and sold to random men. It’s about her fight for life and how she breaks free on her own.

Phase9.tv journalist EDF interviewed the movies star and co-writer Frida Farrell who wrote this film based on what happened to her in real life.

EDF: I must say that Selling Isobel is a powerful movie.
Frida Farrell: Thank you! Also thank you for taking the time to watch the film.

EDF: What made you decide to turn what happened to you into a movie?
Frida Farrell: The thought of possibly being able to help other young girls. That’s been the main drive throughout this whole process. Before that thought was planted in my head I had no intentions of ever telling anyone. Like, ever.

EDF: Was it always your intention to play the role of Isobel?
Frida Farrell: No. I sort of got talked into that one. And the thought behind me playing Isobel was that it would possibly push the message we’re trying to get through ever more.

EDF: Did you have any reservations whether you could get through certain scenes in the movie?
Frida Farrell: I did, absolutely. But once we were on set filming I managed to concentrate solely on the work. Apart form a few rare times when I had to take time out. Once I locked myself into the bathroom for 10 min to be able to clear my head.

EDF: Was it a conscience decision when writing the movie not to show what your boyfriend and daughter were going through or to follow any investigation or search for Isobel?
Frida Farrell: Yes. Very much so. Because we wanted to take the audience through the same claustrophobic trip that Isobel was going through. And we didn’t want to do what every film does – break the tension and cut to outside. Isobel could never do that in real life. Also in real life there was no one looking for her, because no one knew she was missing.

EDF: It makes the movie a more intense watch by not showing anything other than what was happening in the room. It feels claustrophobic. Did you ever think you were going to escape because in the movie your captor keeps saying that he would release you?
Frida Farrell: No, even if he said that I thought he’d most likely kill me, because I had seen his face.

EDF: What is the overall message you want to get out to people to encourage them to watch your movie?
Frida Farrell: I want people to realize that this can happen to anyone. You do not have to be from a foreign country, poor and have no knowledge of the language. I was just a normal girl. Spoke English perfectly, had gone to school in London and wasn’t living on the streets.

EDF: Selling Isobel had won a Raindance Film Festival award Indie Award. Was this win unexpected?
Frida Farrell: Yes it was. But wow so amazing. And I’m so grateful to everyone at Raindance, the amazing jury and to Elliot and his lovely wife.

EDF: Do you have any other projects lined up?
Frida Farrell: Yes. Me and Glynn Turner (the writer / producer) have 2 projects we’re looking at next. They’re not true stories, just normal thrillers. 🙂

EDF: All the best with what you do next.
Frida Farrell: Thank you. And thank you for your great questions.