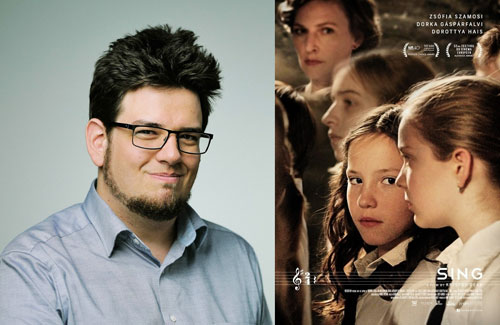 The heartfelt drama Sing (aka Mindenki) is based on a true story; a young girl is forced to either stand up against a corrupt system or fit quietly into it. Dealing with themes of ambition, rejection and solidarity, this powerful film was created and directed by Kristof Deák.

Phase9: We have the pleasure of talking with Kristof Deák, about his short film “Sing”, which has been nominated for an Academy Award. Congratulations on the nomination. Was this nomination a surprise considering how well “Sing” has done at other award ceremonies?

Kristóf Deák: We were still very surprised! There are over ten thousand short films made in the world, I think 2016 has seen a new world record set in this area. And despite all this, we still landed in the top 5 – it’s unbelievable!

Phase9: What are the origins of the story?

Kristóf Deák: The original story came from a Swedish flatmate of mine, she was in a big choir where she was told to mime instead of singing out loud.
The film is inspired by a true story – the first half is anyway. The twist ending of the film is our invention.

Phase9: This is one of those stories that could have multiple interpretations. One of the messages I got from it was that sometimes adults may make selfish decisions and in “Sing” the children know better and act on it. What would you hope that people will get from watching “Sing”?

Kristóf Deák: I hope they will feel it’s possible to end injustice and change things for the better when we stand up united.

Phase9: Even though this is based in Hungary, the story is universal and it could be set in any country. At what point was the decision made to shoot it in Hungary?

Kristóf Deák: First, I set out to shoot this film in the UK – a British screenwriting duo I work with (Bex Harvey and Christian Azzola) wrote the first draft.
It didn’t quite work out and we ended up putting it away for a couple of years. I then heard of a funding opportunity in Hungary and rewrote the script in Hungarian, setting it in the time of my own childhood.

Phase9: How long did it take you to find the two young leads, Dorka Gáspárfalvi and Dorottya Hais?

Kristóf Deák: We had 3 rounds of auditions and looked at 80 kids, each of them with some acting experience. It took a while but it was worth being thorough.
Dorka and Dorottya were paired up in the final stage and they were just delightful – instant chemistry as friends.

Phase9: They both put in natural and believable performances. Were the rest of choir actual actors or from a choir because some of the harmonies were really nice?

Kristóf Deák: The rest of the choir were an actual choir and it’s actually their voice you hear in the film. They were wonderful, very disciplined yet so alive in front of the camera.

Phase9: The old saying is that one should never work with children or animals. Would you say that this was not the case when shooting “Sing”?

Kristóf Deák: Absolutely not! Despite only having 5 days for principal photography, we shot a 25 minute film and we rarely lost time because of the kids.
They were full of energy and their creativity came in handy when we needed to come up with clever solutions during the shoot.

Phase9: Do you have any projects lined up next?

Kristóf Deák: I’m currently in post production on an original sketch series I wrote and directed for Paramount Channel called Come Around – it’s about a guy in a coma.
Next in the pipeline is my short film project called Best Game Ever, a fresh look at the role of Artificial Intelligence in our lives today. It has an uplifting grand final scene just like Sing…

Phase9: We wish you all the best with that and more so with the Academy Award nomination.