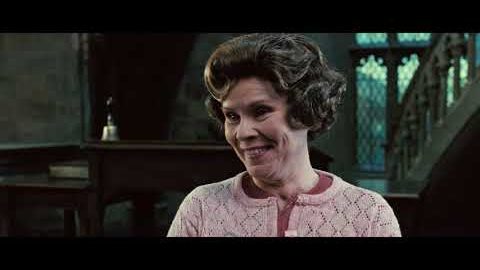 Harry Potter returns to Hogwarts for his fifth year–and his greatest challenge yet . . .

A summer has passed since Harry’s encounter with the Dark Lord, and Harry returns to learn that the wizarding community remains in denial about Voldemort’s return; the minister of magic believes that Headmaster Dumbledore is lying; and a new Defense Against the Dark Arts teacher has been assigned. Now, with the entire wizard community in peril, the future of magic may depend on Harry Potter and the Order of the Phoenix.

When the new professor, Dolores Umbridge’s (Imelda Staunton–Nanny McPhee, Vera Drake), Ministry-approved course of defensive magic leaves the young wizards woefully unprepared to protect themselves against the dark forces threatening them and the entire wizarding community, Hermione (Emma Watson) and Ron (Rupert Grint) urge Harry (Daniel Radcliffe) to act. Meeting secretly with a small group of students who name themselves “Dumbledore’s Army,” Harry teaches them how to defend themselves against the Dark Arts, working with a secret order of wizards calling themselves The Order of the Phoenix to prepare the courageous young wizards for the extraordinary battle that lies ahead.