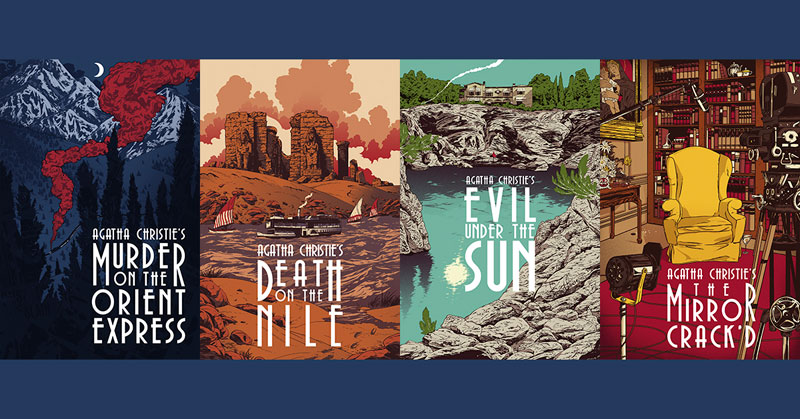 STUDIOCANAL has announced the release of four newly restored, star-studded classic film adaptations of the work of the world’s all-time best-selling author Agatha Christie. The brand new digital restorations (taken from 4k transfers) are the perfect way for fans of these classic mysteries to puzzle over “whodunit” in the highest quality yet and are released as part of the VINTAGE CLASSICS collection.

Marooned in a snow drift, an opulent Orient Express train is the scene of a brutal murder – a no-good American Tycoon lies dead with twelve dagger wounds, but which of the passengers is the guilty party? Belgian detective Hercule Poirot must investigate…

Sidney Lumet’s elegant and star-studded adaptation of MURDER ON THE ORIENT EXPRESS stars Albert Finney (Saturday Night and Sunday Morning, Skyfall) in his only incarnation as the Belgian sleuth Poirot (this despite Agatha Christie’s own endorsement of him as her personal favourite) alongside Ingrid Bergman (Casablanca, Notorious), who won both an Oscar and BAFTA for Best Supporting Actress and John Gielgud (Gandhi) who claimed the Best Supporting Actor BAFTA for his role.

Hercule Poirot is enjoying a holiday aboard a luxury Nile steamer, when a mystery assassin takes the life of an heiress and he is called upon to track down the killer amongst his fellow travellers…

A visually sumptuous and quintessentially British production, Death On The Nile won an Oscar® for Anthony Powell’s costume design and introduced Peter Ustinov (Robin Hood, Spartacus) in his first portrayal as the Belgian detective Poirot. Surrounding Ustinov are a stellar cast of the time including Maggie Smith (The Prime of Miss Jean Brodie), Jane Birkin (Blow-Up), Bette Davis (All About Eve), David Niven (The Guns of Navarone), Mia Farrow (Rosemary’s Baby), George Kennedy (Cool Hand Luke) and Angela Lansbury (Beauty and The Beast)

THE MIRROR CRACK’D finds Angela Lansbury (Beauty and The Beast) moving from a supporting role in Death on The Nile to centre stage, as she takes on the role of the iconic Miss Marple alongside a cast that numbers Geraldine Chaplin (Doctor Zhivago), Tony Curtis (Some Like It Hot) Edward Fox (Gandhi), Rock Hudson (Pillow Talk), Kim Novak (Vertigo) and
Elizabeth Taylor (Cleopatra).

A mysterious death in a glamorous hotel in the Mediterranean can only be solved by legendary Belgian sleuth Hercule Poirot….

Another star-studded cast heads up Guy Hamilton’s second take on an Agatha Christie story, Peter Ustinov returns as Hercule Poirot and is joined by alumni from Death on the Nile, Maggie Smith and Jane Birkin as well as James Mason (North by Northwest), Roddy McDowall (Planet of The Apes) and Diana RIgg (On Her Majesty’s Secret Service),