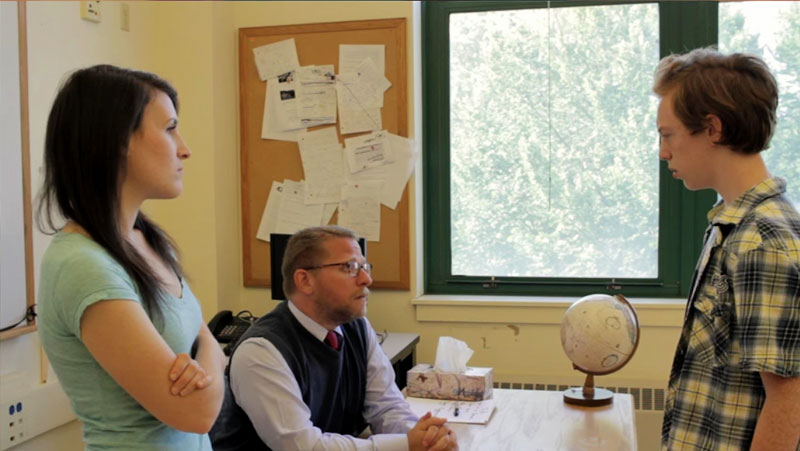 When David, Editor of his high school newspaper learns that it is going to be transformed into an online blog, he goes on the hunt for the perfect story to try and save his printed page. The problem is that his story is fake news.

It’s certainly very topical and the premise is good but it felt like a film of two halves in places. It’s clear that director, Zachary Lapierre and cinematographer, Ian Everhart know how to set up an artistic shot and the end result is a classy looking film with some great set pieces. The music works a treat, blending seamlessly into the visuals and the editing adds a good pace to the entertaining if clichéd storyline.

Unfortunately it fails to retain this class when it comes to the characters. David is simply too weak and petulant to be likeable. Noah Bailey looks the part and pulls off ‘geeky teenager’ to perfection but the dialogue seems to deliver an entirely different character and the two never quite gel. With the exception of obvious industry veteran, Timothy J Cox whose portrayal of the school principal held it all together beautifully, most of the other characters are pretty much forgettable although I question if they really need to be anything other than.

The premise of the varying pranks was good if predictable but with a runtime of just 15minutes and a short-film sized budget, a filmmaker can’t work miracles and despite the weakness of its main character, overall it’s a good film with some impressively stylised production techniques that give it a look and feel more closely associated with bigger budget features.