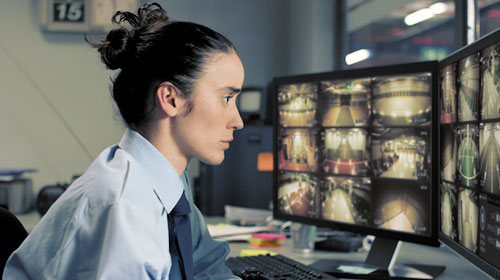 TIMECODE is directed by Juanjo Giménez who makes a mudane, repetitive security officer’s job into one of secret wonder.

We follow Luna (Lali Ayguadé) a security guard at a multi-story car park beginning her day shift, relieving Diego (Nicolas Ricchini) who has been on the night shift. They exchange pleasantries but nothing else. One day she gets a call from her boss saying that one of the residents had found a broken tail light from their car. Her boss wants her to check the security camera footage right there and then. Luna calls up the footage and sees Diego doing his rounds. Luna follows Diegos movements on the various cameras but notices that he is doing more than just walking his rounds and his actions caused the broken tail light. She covers for Diego by telling her boss that the footage shows nothing unusual.  She goes to where the parked car was and retrieves part of the tail light.

Diego comes in for the next shift, they both exchange pleasantries and Luna leaves, leaving behind the tail light and a note with a time on it. Diego calls up the timecode and sees that Luna has left a message of sorts for him. This goes on, back and forth for a number of days until one day Luna notices that Diego has not left a post-it note on the computer. She turns around and sees the post-it note on the window but Diego has placed it outside the window.

This is a very pleasant and easy to watch film, and Giménez manages to say a lot in this short film without relying on much dialogue. The action that is within speaks volumes as both protagonists realise that they both understand each other through their method of communication, with the help of the timecodes. TIMECODE has won numerous awards including the Palme d’Or for the Best Short Film.