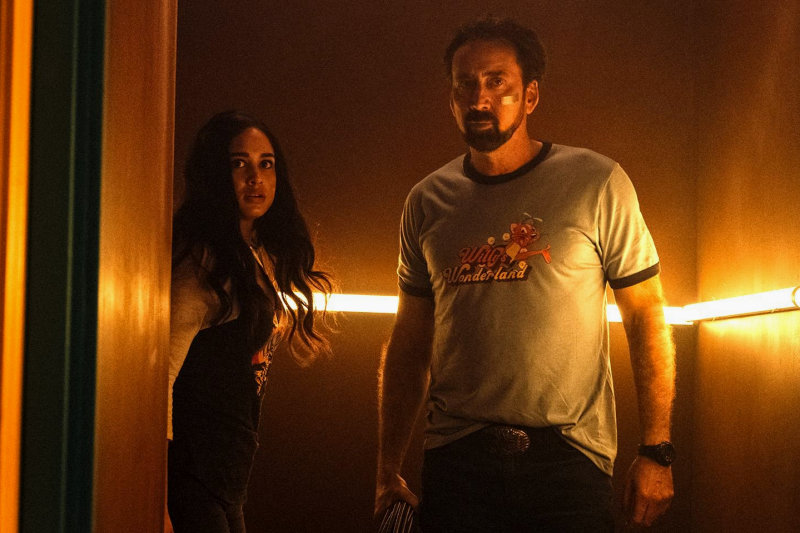 Willy’s Wonderland is an abandoned family entertainment centre that’s been closed for years as it is haunted by the ghosts of serial killers, who have possessed a number of life sized animatronic characters. They have continued to kill unsuspecting tourists put in harms way by the locals as human sacrifices in exchange for not killing the townsfolk.

Nicholas Cage’s character, credited only as The Janitor, is tricked into spending the night cleaning Willy’s Wonderland when his car tyres are spiked and the mechanic wants a thousand dollars in cash and the ATM is out of order.

Local teenager Liv Hawthorne (Emily Tosta) and her friends are on a mission to burn the place down and rescue the latest victim. However the man credited only as The Janitor is determined to stay the night, clean the Centre and fight the possessed animatronics, a job which we discover he is extremely capable of, as he takes regular breaks, drinks cans of soda and plays the pinball machine, all of which gives him incredible strength and stamina. As Liv says in the movie, he’s not locked in with them (the animatronics), they’re locked in with him!

The film plays out like the plot of a video game, but this is no special effects laden multi-million dollar movie. Instead, with its reported five and a half million dollar budget, it relies on good directing, fast editing and excellent acting from a mostly unknown cast.

Nicholas Cage gives a great performance, which is really saying something, as he doesn’t speak at all, instead relying on facial expressions and actions to convey his part. All the other cast really deserve their own mentions if only there was time, but I do think that Caylee Cowan’s portrayal of the streetwise sexy Kathy was particularly funny. Emily Tosta is outstanding as Liv, the leader of the teenage group, her reactions to Cage are just perfect and help sell Cage’s own performance.

Due to it’s low budget and lack of publicity I’m sure Willy’s Wonderland will be overlooked by most people, but seriously if you’re looking for some great entertainment you can’t go wrong with this really fun movie which will probably become a cult classic.