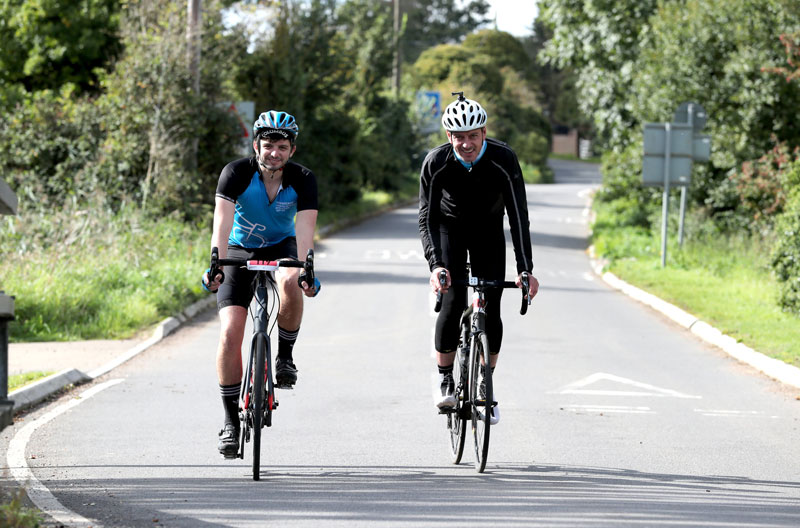 95 riders, including the TV duo, took on the Parkinson’s UK BOXCAM 200 event, cycling from Bristol to Cambridge in two days for the charity.

Parkinson’s affects one in 500 people in the UK, and while medication allows people to manage their daily life, it only masks the symptoms. It does not stop, slow down or reverse the condition and there is currently no cure.

BOXCAM 200 was created to travel through three of the UK’s most prominent Parkinson’s research cities – Bristol, Oxford and Cambridge – with the aim of raising money for more studies into the condition and to find better treatments.

Enzo, who has already taken part in several cycling challenges for Parkinson’s UK for his father who has the condition, said: “It was a fantastic event. Everyone was committed to helping each other get over that finish line and raise as much money as possible for better research into Parkinson’s. It was very wet on the last day, but the rain didn’t dampen anyone’s spirits at all.”

Michael cycled for his aunt, who was diagnosed when she was just 42. He said: “It was a huge challenge and I’ve not done anything like it before, but it was completely worth it. Research into Parkinson’s is so important, and it’s all that we have to help find a cure.”

Paul Jackson-Clark, Director of Fundraising for Parkinson’s UK, said: “This is the first time created an event to celebrate the research already being done at sites across the UK, while also raising vital funds for the work to continue.

“BOXCAM 200 was a huge success, with 96 cyclists raising more than £60,000 combined – and Enzo and Michael played a huge part in making that happen.

“All of the money raised will go towards our We Won’t Wait campaign – to fund better research into Parkinson’s and help us find treatments that can slow, stop or even reverse the progression of the condition.”

For more information about BOXCAM 200, or to help raise money for research into Parkinson’s, see www.parkinsons.org.uk/fundraising

For advice, information and support, visit www.parkinsons.org.uk or call the free, confidential helpline on 0808 800 0303